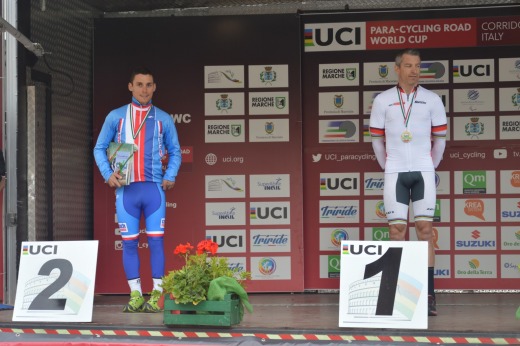 After a great time trial on Friday, Ivo had to face a Sunday road race on the same technically demanding circuit. The road race started at 9:02. It had been raining in Corridonia since the early morning, which made the technically demanding track all the more difficult. In this road race Ivo finally managed to break last year’s run of bad luck caused by protracted medical problems and win a silver medal! On a rainy Sunday morning he was competing for a medal with the Paralympic winner and world champion, the Canadian Chernov and Australian Hicks. In the end the Canadian won in a photofinish, but the Czech rider will be bringing home a well-earned silver. And as Ivo told as at the finishing line, in places he was riding at the very limit, when he skidded on both wheels all the way through some of the technical sections, and he confirmed that it had been the most demanding race of his career to date. We congratulate Ivo on representing the country brilliantly.