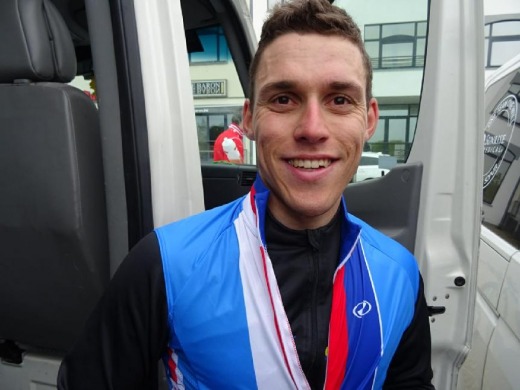 On Sunday 19.5 at 15:30 Ivo stood on the starting line of the road race for the world cup in Ostend under the watchful eye of coach Jaroslav Bláha. Compared with the Friday time trial the weather was worse on Sunday - it got a lot colder and started to rain. The rain, cold, and gusting wind made the race on the flat a truly exciting spectacle. The peloton gradually upped the tempo, and then individual riders started to break away from the main group one by one. Ivo held on in about 5th place. Ivo managed to catch many of the breaks, on the 6th lap, on a sharp right bend, the lead of the peloton once again broke away - at that moment Ivo’s left hand slipped off the handlebars so he could not pedal as was needed at the given moment, and the leading group pulled away from Ivo. The peloton’s leading riders gradually built up a 27-second lead on Ivo, but he wasn’t willing to accept this, so he increased his tempo and second by second started to catch up with the leaders, ending up 7 seconds behind at the finish line. Ivo came in fifth behind the leaders. The race was won by the Frenchman Leute, ahead of the Belgian Vromant and Canadian Chernov. We congratulate Ivo on successfully representing the country once more.