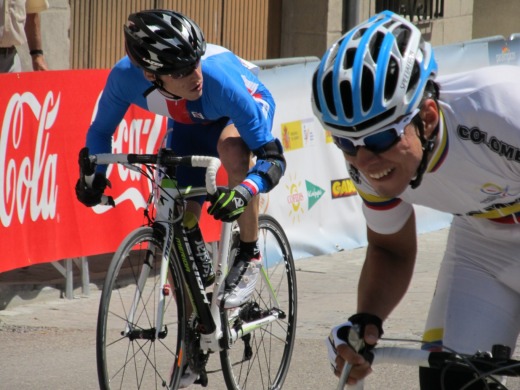 At Sunday, 06.17 on the agenda was the road race. Just as the time trial and road race was very well cast opponents from around the world. The race was listed at 5 laps, a total of 60 km. The race was more interesting, because the target was 800 meter climb with considerable slope, but mainly was a dice roll, which were already pretty broken.Gradient would not suit me dice on which I ever rode the left hand of handlebars. In the race I tried to escape twice to take up, especially when the second looked very promising, but eventually I came strong main field. The result of my efforts were tearing the main field. Therefore, during a raid in the last circuit has stayed with me only the best racers. It was obvious that the target will spurt group of about 10 racers. As they succeeded under the baton of Spanish and Peruvian escape Spanish rider, we remained in the main field of battle for 3rd place. At the beginning of the final climb I put on my sprint. This time I just resisted the German racer, so I scored a fantastic goal in the 4th. This location ensured me to remain at the forefront of scoring World Cup.