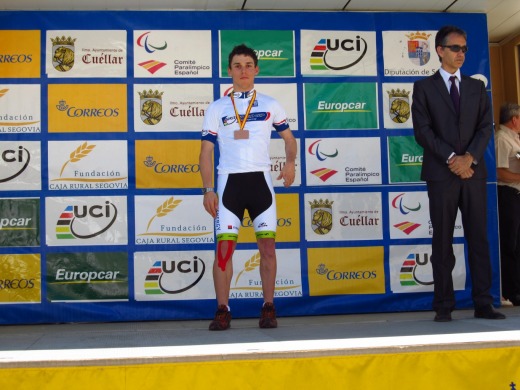 Sunday, 16.06 an ineradicable trace on Ivova cycling racing and, for the first time in nineteen years, earnings jersey makes a leading world cup.On excellent performance last weekend in Italy, Ivo today in Spain in the road race in Cuellar confirmed its dominance in this world peloton handicapped cyclists in their category.Oblivious of the world's youngest rider peloton put up a fight with rivals, but also with tropical weather (35 ° C in the shade). since the first meters of the race left no doubt that it will once again be one of the cyclists indicate what time.Still tried joining tear starting field, which gradually fell out of his largest favorite.Thereby for Iva paved the way for further podium placement.Today was a great 3rd place in the tough world competition.But mainly profit of location, and 5th place in Friday's time trial Iva brings into a leadership position world Cup!! is it just another confirmation of the correct path you chose with his team of realization and sponsor.Ivo confirmed that becomes the great hope of the Czech cycling handicapped, but perhaps already very supportive Czech national team.