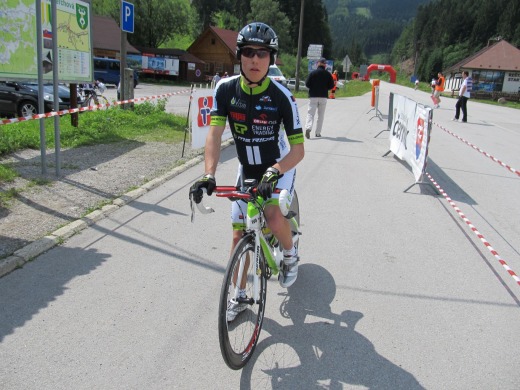 On 14 July 2013 to 13.7-Ivo participated in European Cup race in Slovak republik Vrátná dolina.This race is composed of Saturday's race led by clear and safe circuit with a length of 9 km in the return Vrátné doline, Sunday's time trial is then extended by 4 km of the total length circuit at 11 km.

Since it is a clear ring with a prolonged climb, very hard to find soupeřům.Během started Saturday's race escalated Ivo race pace together with the German competitor.Result was that when entering into 3rd round was ripped off rivals and began a battle between them.Entrance alternated onset, the onset corresponded Ivův next opponent entrance.That the finish line came rivals together.Here Ivo apply their skills quietly stepped up the pace in a sitting position and let nothing to chance defeating opponents by 1.17 seconds.

For Sunday's time trial was getting from Ivo most recent position, he had the opportunity to inspect the entire journey distances from competitors.Here routine finished the time trial with a lead of 20 seconds at each other competitor.Thereby Ivo confirmed his great form from the first half of this year will have year.Now Ivo week off to gather her strength in the second half of the season, when it was at the end of August for a World cup and world Championships in Canada.