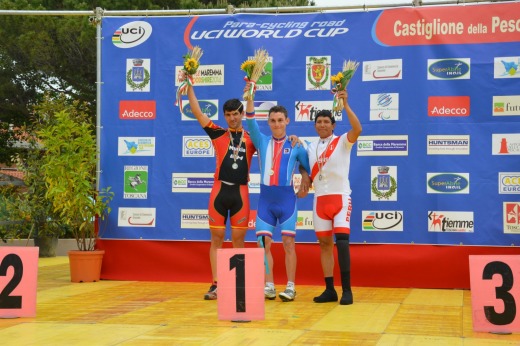 Sunday day 11.5. was the culmination of World Cup 2014 held in Castiglione in Tuscany. The organizers prepared for the road race racers , built in the center of the city . Already during Saturday practice with Ivo focused on exploring the pitfalls of this technical but very fast circuit. The big question was whether to choose wheels with high rims , or classic . Finally, the implementation team Iva decided to superbly prepared bike Merida Scultura SL team ( nativism is a new weapon in this year's race ) put on a classic racing bike Campagnolo Shamal . From the very beginning, Ivo sat at the head of the field , especially when his thanks to this very soon depleted. Ivo patrolled the entrances and conducted himself directing the race. This offensive tactic literally surprised remaining contestants , who headed the racing field refused to rotate . When Ivo saw that the entire field waiting what he would do , he decided to frontal attack and put in 5 laps to escape. This he managed to maintain until the finish , where he gradually gained valuable one second to him at the finish judge measured the lead for the second competitor of 2:20 .