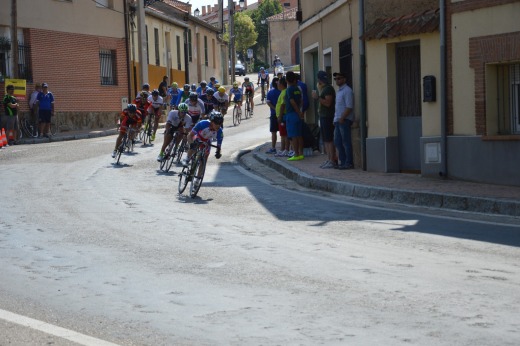 Sunday's road race competitors introduced to the Spanish city Cantimpalos. The racers were ready eighth circuits, each with a length of 8 km. As is customary in Spain, it is always a very technical circuit that combine technical passages in the city streets with cobblestones, riding on the wind between the plains in very hot weather and wind. Ivo was ready to race properly and thoroughly seening tracks we decided to tactics of frontal attack from the first meters. In Ivo race started like a dragon from the first meters began to pace. When the race found that no one wants to rotate, went first in the forefront of the field. With his pace soon the entire peloton led by Ivo finished runners category with less disability, who started two minutes ahead of his categories. In addition, Ivo continued at a high pace, gradually a large part of this was not enough opponents. Third circuit before he joined goal racer from Peru Hilario Rimas Price from England to escape the Ivo in cooperation with Michael Stark drove to subsequently quietly on the long straight Hilario started again from Peru, which gradually gained up to 45 sec. lead. In the last round, the pace intensified, 3x joined Eckhardt racer from Spain, his tactics could only Ivo, the pair started cutting powerfully lead runner, but in the end it was clear that they would not lead to a spurt occurs on the pair of second place at the finish . Ivo began to escalate tempo to 450 meters before the finish won about 30 meters ahead of you before safely checked Eckhardt to finish. This great finishing with a Ivo arrived for the silver medal. His performance Ivo confirmed that despite his age (the youngest ever rider peloton world), is already among the world's very best athletes, confirmed his talent Ivo gain 2nd place overall in the World Cup 2014. Certainty in these Ivoś performance brings him great Merida bikes to time trial bike Warp, but also a new round of Merida Scultura team that brought him enormous confidence in the leadership and direction to overcome the inequalities of the road. Many thanks to all partners who Ivo allowing great race and gain valuable medals from world and European competitions.