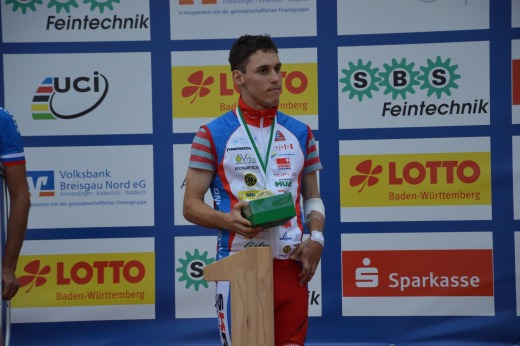 Sunny Sunday, 7/26 led to the start of the World Cup road cycling handicapped keen competition from around the world. Before the upcoming World Championships next week, it was the last performance-testing of cyclists, with the gain valuable points in the World Cup. Among the competitors at the start and stood Ivo, who after a bronze medal in the time trial on Friday, wanted to ascribe more points in the World Cup. The race took place in the streets of Elzach where competitors have completed 12th rounds. From the beginning it was clear that nobody leaves anything to anyone for free, after the experience with the fall of WC in Maniago Ivo tried again by its offensive concept to hold the head of the peloton, that he managed to 2.okruhu, when it was again brought down a Russian athlete. Ivo helped to his feet viewers, for which, from that moment became a hero because his usual pace again proceeded to prosecute driven peloton and despite numerous bleeding wounds on his body. How plowed through the runners ahead of him, audience response was getting louder. Ivo's face was familiar from posters, organizers hung on all corners, even became the main person on the brochures to the Cup. From the moment he got the first position and led the peloton again, the roar of the spectators even more heightened. When he Ivo appeared in the finishing straight in the lead group of people applauded him standing. In this atmosphere Ivo won, ahead of competitors from Russia and Peru. He was then rewarded with awards podium ceremony, which took the applause ends.