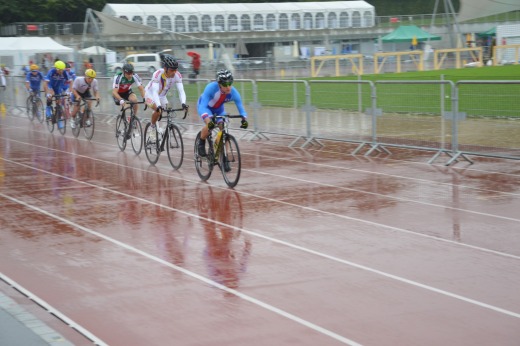 Do today's race Ivo boarded taping on his shoulder and knee, undertreated Sunday after the fall of the World Cup in Germany Elzach. From the morning the competitors and falling streams of water at 8 pm. At the start, the weather was becoming increasingly cloudy. Ivo went into the race with determination to finish it in the TOP TEN for sore ribs, which are still experiencing since Sunday, after a fall or could not do better expectations. Yet Ivo has a heart great warrior from the first meters to patrolled front of the pack, only in the second round was not enough for the onset of the Peruvian athlete Hilaria and then in round 5 of the onset of the Spaniard Eckhardt. After the leak racers rode at the head of about 12 member group, which claimed Ivo music. The final sprint finals arrived in the main athletics stadium field in a leadership position with Russian and Colombians closely in tow with Ivo. The last arc running track Ivo got wet and began to overtake rival tartan, cut through the finish line victorious sprint of this group, which brought Ivo fantastic and totally unexpected bronze medal. All Ivo congratulations.