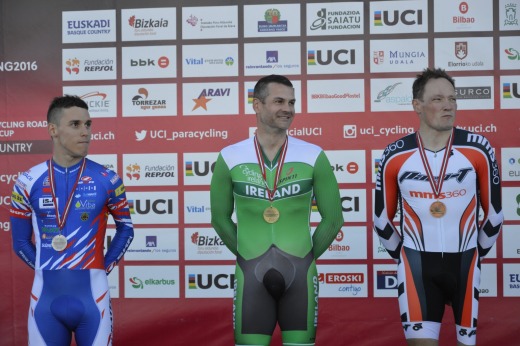 Friday's time trial road was built in Vitoria. Ivo started in the afternoon when he began to blow strong gusty winds. The wind took the time trial pretty demanding race. Ivo went toward the fight with 24 other contestants from around the world. From the first meters it was clear that this time trial will be a lot of strong will, who best cope with strong winds. When passing to the second round to Ivo moved continuously in 4th place. Ivo proved his pace even escalate into the second round when he began to overtake competitors starting before him. Towards the objective was the entire expedition in anticipation, at which point Ivo crosses the goal. After crossing the finish line with everyone just argued, because preliminary results implied by standing on a box. The result surpassed all. Ivo had the second fastest time ever, it remained only competitor from Ireland Colin Lynch, the third place came the English racer Price. Ivo Congratulations to this great result.